Being creative with Potatoes

As you know, I try to come up with an interesting take on a traditional ingredient. Sometimes that's easy and sometimes not. It tends to be a little harder when you have a ingredient that is ubiquitous. That is definitely the case with potatoes. Really, what could I possibly do that hasn't already been done: baked, fried, mashed, creamed, roasted, sautéed?

Well, I did manage to come up with a soup that is just a little bit different than the usual ... but before I go there let's talk about some interesting facts about potatoes. I came across a fun little web site that is all about the spud. There are nearly 4,000 varieties of potatoes broken down into a few main categories: russet, red, white, yellow and purple. They are best stored in a cool dry spot in the basement, except for new potatoes or ones with a thin skin, those are best stored in the 'fridge. 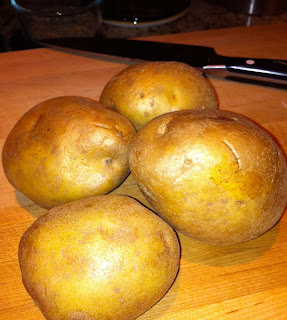 The potato was first cultivated about 10,000 years ago in South American. Spanish explorers brought the potato to Europe in the 16th century. At first it was used mainly for livestock feed. In the 1600's, the potato was introduced into North America from Europe. It did not become an important food crop until the early 1700's, when Scotch-Irish settlers began potato production in New Hampshire.

Nutritionally they are a great source of protein, potassium, and fiber. They are also high in Vitamin C and B6, niacin and folate. Generally speaking potatoes are low in fat, it's the butter, cream and frying that give them a bad wrap.

You all know by now that creating soup is a favorite thing of mine. Especially since the weather has turned chilly. One of my favorite potato leek soup recipes to do is from Ina Garten where she roasts them before making the soup. It's a very tasty rendition, but a little time consuming, so I decided to take her idea and change it up a bit. 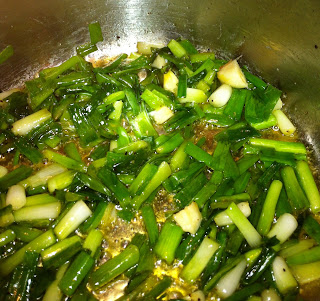 Instead of leeks I used scallions, and sauteed them with garlic. 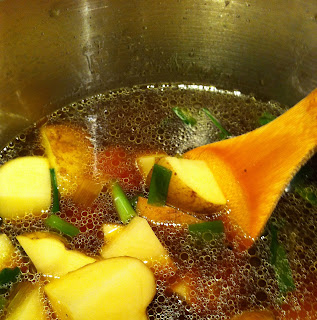 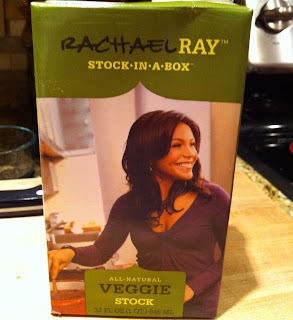 While that is happening I was about to peel the potatoes and then remembered reading that most of the fiber is in the peel, so I decided to leave it on. Stop and Shop is now carrying a new collection of stocks by Rachael Ray. So a picked up the Vegetable and Chicken this weekend to give them a try. For this soup I'm opting for the vegetable version. 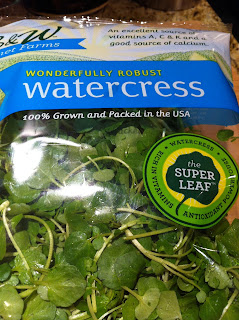 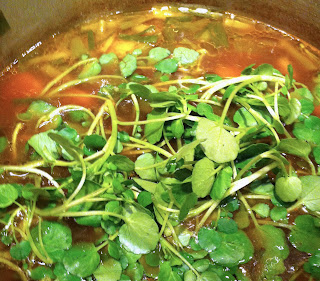 The other ingredient I came across this weekend in the produce aisle was watercress in a bag. I rarely see watercress, and like the peppery bite of it. In that went just as the potatoes were finishing up. 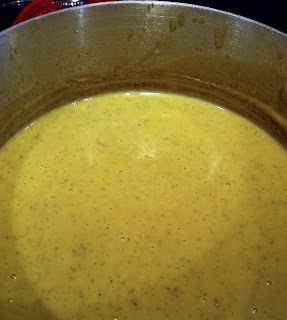 Once the potatoes finished cooking I let the pot cool down a bit and pureed with my stick blender and added a little fat free Half and Half to give it a little creaminess.
What could be simpler and more perfect on a chilly day? 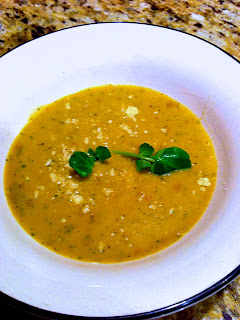 In a small stockpot over medium heat sauté the scallion and onion in the oil along with ½ teaspoon of salt and ¼ teaspoon pepper. Cook until soft and just turning golden brown, about 3 minutes.


Add the stock and potatoes. Bring to a boil, and then lower the heat slightly. Cover and simmer for about 1o minutes, or until the potatoes are just soft. Add the watercress and continue to cook another 5 minutes.


Remove from heat and cool for about 10 minutes. Using either a stand or stick blender puree the soup. Add the half and half, Parmesan and puree a little more. Check for seasoning.


To serve, reheat gently and top with a little more cheese.